The term arrhythmia is related to any disturbances in the electrical conduction of the human heart. During an arrhythmia, the heart rhythm strays from it's normal beat. Signs often include rapid heart beats called palpitations, irregular heart beats, or long pauses between beats. Arrhythmia's require immediate attention of a cardiologist because they can often interrupt the flow of blood outside and within the heart.

In order to understand the gravity of an arrhythmia, the intricate electrical pathway of the heart must be understood. Every heart contraction occurs due to the movement of a tiny circuit that moves within the heart from the top to bottom. The heart contraction results in blood being pumped to various parts in and out of the heart.

A special group of cells called the sinoatrial node (SA node) located near the top chamber of the heart (right atrium) fires a signal from the top right chamber to the top left chamber (left atrium). As the signal moves from one end to another, the heart muscle is contracted and blood is pumped out of the atrial chambers. This blood is collected in the lower chambers of the heart known as the right and left ventricles. As the initial electrical signal runs it course through the top chambers, it gathers in another group of specialized cells located some distance below the SA node. This group is called the atrioventricular node or AV node. A short pause is taken by the signal at the AV node and then fired once more. Once the signal is fired again, it travels down a branching path that runs down the tissue wall that divides the left and right lower chambers. This path is known as the bundle of his. As the electrical impulse travels down the bundle of his, the impulse is spread out through branches that force the ventricle walls to contract. This contraction causes blood to pump out into the body and lungs. After the signal is dispersed through the bottom ventricles, the SA node begins to recharge in preparation for another electrical impulse that will again be sent throughout the heart. 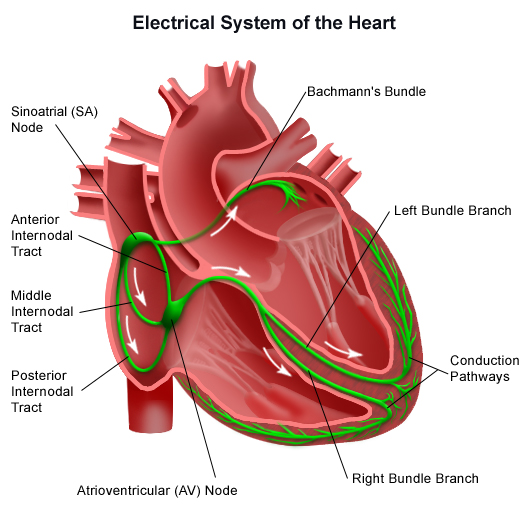 Unfortunately this conduction system does not always work the way it is supposed to, and the electrical impulse strays away from it's designated path. When this happens, arrhythmia's can cause the heart to beat to fast (known as tachycardia), too slow (referred to as bradycardia), or the addition of extra beats in the heart rhythm. Because an electrical impulse can be delivered at different rates to different chambers of the heart, there are many different kinds of arrhythmias.

A very simple tool in the identification of any kind of arrhythmia is an ECG . This test takes only minutes to conduct, is non invasive, and yields a visual representation of several heartbeats in a given time window. Several treatments are available and vary on the severity of the situation. Cardiologist may also implement the use of devices that are safely implanted to regulate the heart's rhythm. Pacemakers and defibrillators are placed in pockets within skeletal muscle, then wired to heart tissue so that they may keep one's heart within normal rhythm. Pacemakers are often times calibrated to make sure the heart beats a normal 60 beats per minute while defibrillators are designed to make sure the heart returns to normal pace when the rhythm goes of course.